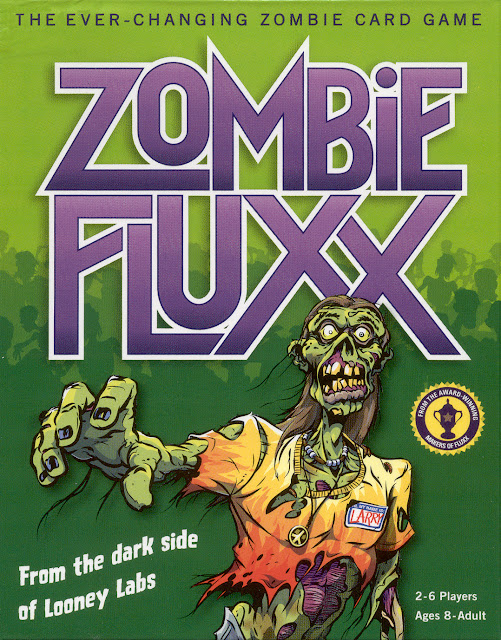 For those of you who aren't familiar with the game of Fluxx, it is a game of ever changing rules. You start off with two basic rules Draw One Card and Play One Card. As the game progresses you can play additional new rules such as Hand Limit 0 (meaning at the end of your turn you need to discard any cards you have in your hand), Draw 3 (you get to draw three cards), Groaning Required (you need to moan/groan like a zombie), Play 2, etc... Currently you have available Fluxx 4.0 (Version 4 of the core game), Martain Fluxx, Eco Fluxx, Family Fluxx, Pirate Fluxx, Star Fluxx, Oz Fluzz (soon to be released), and of course Zombie Fluxx. Each version is a stand alone game, though you can combine versions for "new" games of Fluxx (though some of the cards from different versions might now play well with other versions). There are also a number of Promotional cards available, some can only be used with certain version of Fluxx where others can be used in any Fluxx Deck.


Over on the Board of the Living Lead forums I have a thread for Zombie Fluxx New Card Ideas and House rules. Here are some of my Zombie Fluxx: Board of the Living Lead Expansion cards that I have came up with. All Creepers I have created count as Zombies. Currently all the Keepers I have created all count as A Friend, though unlike the Friend Keepers in Zombie Fluxx they aren't turned into Zombie Creepers by the card Dead Friends or by any other means (such as the Creeper Patient Zeros ability to turn any friend Keeper you control into a Zombie Creeper).

When you have Vampifan in front of you choose one Player and move any zombies in play to him, you may even chose yourself. Vampifan May Not be turned into a Zombie.

If you own any Zombie Miniatures or Survivor minis you must place one Zombie mini in front of you for each Zombie Creeper Card you have out, one Survivor Mini to represent you and one survivor Mini per Friend Keeper you have in your control. Those who have done this are now allowed to draw 2 additional cards and play up to two additional cards per turn.

Action: Knowledge of the Undead

If you can name at least 5 Zombie themed movies when playing this card Draw 3 Cards and Play any 2, keeping the 3rd one.

If you can't name 5 Zombie movies only draw 1 card and play it.

Goal: Board of the Living Dead

If any player controls the Keepers Vampifan, Brummie, Eldorf Dragonsbane and Creepers Patient Zero, Zombie Chow and LordSiwoc then they win the game.

When killed Zombie Chow moves 3 players to the left, if move results in Zombie Chow returning to the player it stated the turn with then he moves 1 player to the left.

When LordSiwoc is in your control destroy one non-weapon keeper that you control unless you discard 2 cards from your hand.

May not be turned into a Zombie. When Brummie is in your control you may choose to Draw one additional card at the cost of Playing one card.

May not be turned into a Zombie. While in your control Eldorf Dragonsbane can be used as a substitute for any one other keeper needed towards the current goal.

Action: Search for a Cure

You may search the deck for any one Keeper needed for the current goal or any one New Rule of your choice. If searching for a New Rule immediately play it.

I am thinking of additional card ideas. All cards I come up with will be turned into actual cards using the Fluxx Blanx cards (though they may not have artwork on them). Blanxx come in packs of 5 cards (6 if you count the cover card that has the barcode and instruction on how to use the Blanxx on it). They are 1 Keeper, 1 Creeper, 1 New Rule, 1 Action and 1 Goal. They are blank (other then having the text related to the card type (such as the Keeper card saying Keeper at the top, having the Keeper Icon {a Check mark} and having the text :"To Play this Card, Place it face up on the table in front of you."). A pack of Blanxx is $2US (MSRP, though you may be able to find them online for less).