Is it Junk or is it Gold

As gamers we are notorious for saving every and any interesting little bit we find with plans on using them at a later date either as bits of scenery or additions to a miniature. Some perfect examples are Pringles cans for use as storage tanks or towers, electrical bits and bobs from broken VCRs/DVD Players to help fill out Sci-Fi scenery, etc... In the picture in my last post you will see some of the clutter from my many WIP projects. If you look close you will also see a prescription pill bottle. That is the primary reason for this post. While most people might look at it as a possible storage tank or similar terrain piece I have found a different use for it. I use them to hold old blades from my x-acto style hobby knives, brush cleaning tanks (I keep one in my Army Transport case along with a couple brushes that have had the handles cut down and some paint pots of basic colors such as Black, White, Gray, Brown, Red, Blue, etc... and some brush on sealer for quick on the go paint job repairs), mixing pots for paints (the lids of the bottles), and spare bits (Heads and Arms for the Wargames Factory Zombies, weapons, etc...) that can be used for quick figure repairs (granted they may not be painted until later, but if you say drop the figure and the head that you had to attach breaks off you have some extras that you can quickly glue on as a quick fix).

I have found using the prescription bottles for the old x-acto blades works real well, especially since you don't have to worry about them laying around on the desk where you can accidentally stab a finger or cut yourself when cleaning up. They also allow you to throw the blades away without worrying about them being lose in the trash where they could slice the bag open or work their way to the sides and cut someone who handles the trash bag. 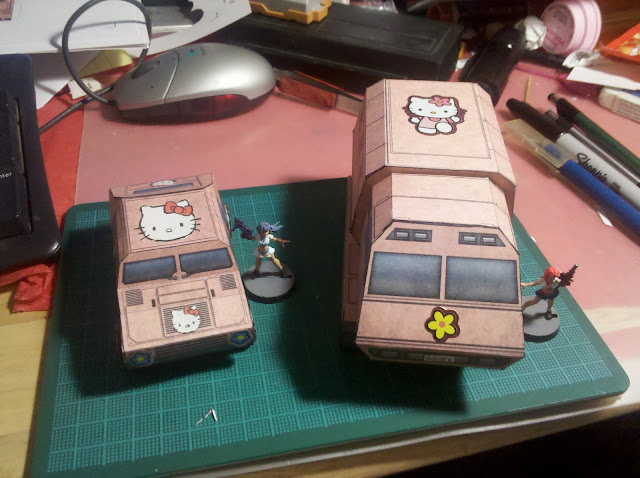 The Jeepvee has the Hello Kitty heads printed off on reagular printer paper, the smaller ones unfortunately didnt turn out that great and I had to fix them using a black fine point pen. The Onager used the Hello Kitty Stickers, though I did use some of the flower stickers on the Jeepvee as headlights. The rear of the Onager also has tulips on the hatch door that came from the sticker sheet. Both vehicles have custom made licens plates (my friends little girls name followed by either a 1 or a 2, Jeepvee is 1, Onager is 2). I do have the 6x6 with stickers on it waiting for me to cut and assemble.
Posted by Unknown at 2/14/2011 06:29:00 PM 4 comments:

This is a non gaming non zombie related post. It is a personal post relating to my family.

Well as of 2349 hours last night (Feb 8, 2011) we now have a new addition to my family. My Brother and his Wife just gave birth to their first child, a bouncing baby boy, named Jaxon Joshua, I am now a Proud Uncle who plans on spoiling his nephew and getting him into gaming when he is old enough.

Both the baby and mom are doing great. Jaxon  is a nice health 7lbs 3oz and 21 inches long, and as my brother claims he is the cutest baby in the hospital, and possibly definitely the cutest baby on earth.

Well off to the hospital to see my brother, his wife and my nephew.

This post is just me going off on a small Rant.

I HATE WINTER. Earlier this week (Wed Feb 2) here int he States we had a nice little winter storm that crippled a good part of the nation, areas like Tuscon Arizona which normally are a low of about 60 during the day have been at freezing or close to freezing temps since the store, the Huston, Texas area is covered in ice, Chicago, Illinois is buried under snow, etc... Well here in Michigan we also got hit. I was planning on going and picking up more Ink, Cardstock and glue Wed. but unfortunately due to the weather condition and how bad the roads were, it didn't happen. Especially when the city plows my street and the end of my driveway gets blocked in from the snow they city plowed into it, and due to the cold temps the ice they used salt to melt ended up refreezing, which made clearing out the end of the drive a little more difficult, had to break the chunks of iced up snow into smaller pieces so the snowblower would be able to handle it. I can't wait till the weather warms up.

When I did finally get out and about last night I never did get to Walmart for the cardstock and glue or Staples for the ink, though I did get to the local Verizon Wireless store and picked up some screen protectors and a snap on hard case for my new Motorola Droid phone (it was ordered on Wed from Verizon Wireless's online store, and arrived yesterday, Friday). I have been playing around with the phone looking for some cool Zombie wallpapers and even some cool ringtones. Right now my ring tone is the Japanese version of the end credits form one of the coolest little silly zombie games ever, Plants vs. Zombies. I did also get the English version of the credits song, Zombies on your Lawn.

On a good know I have been recycling some of the cardstock (about 10 sheets) that I have where what I printed was when I ran out of colored ink (just print what I want on the clean side), and building some additional Barracks props since I dont have enough for the additional Folding Unit Structures I want to build (want to build a couple more Medium FUS's to use as Barracks while the Small will be individual offices and Latrines, while the large and X-Large will be workshops, warehouses, dining facilities, group offices, etc...)
Posted by Unknown at 2/05/2011 06:48:00 PM 4 comments: