A small sampling of my painted figures

Thought I would post a quick sampling of some of my figures, these photos were just quick snaps, I didn't set up my light table or even my light tent to take them.

First up some of my PEF's. PEF is a term in ATZ originally introduced in the Giving up the Goat scenario ($3 from THW), and then included in I, Zombie. PEF stands for Possible/Potential Enemy Forces (officially its Possible, but you can also use Potential), though as some others mentioned because a PEF could be depending on the Die rolls nothing, friend or foe (foe includes Zombies, Ragers, Gangers, Hostile Survivors, etc...), PEF should more  accurately called Possible/Potential Encountered Forces. 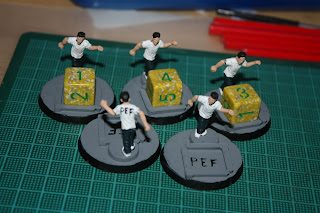 To make these i used 40mm circular bases, Twilight Creations Human Pawns from the game Humans, and some plastic sprue pieces. Before painting I glued the sprue pieces into a box shape large enough to fit the dice used in the image. I then placed a Human Pawn onto the base to see how much of the integrated base would need to be trimmed, then trimmed the figures base to fit on the 40mm base. All figures primed with Reaper Pro Paint Dragon Black before painting. Shoes painted GW Skull White, Pants painted Privateer Press P3 Coal Black, Shirt painted GW Skull White, Arms and Face Reaper Pro Paint Caucasian Flesh. The Base is painted Reaper Pro Paint Neutral Grey . I also used Reaper Pro Paint Dragon Black to paint PEF inside the Die Box and on the back of each figure. The Idea for these figures were stolen, err Borrowed from Colin over at Down Among the Zed Men- PEFs.

Now here are some of my painted Survivors next to some of the Zombies I have: 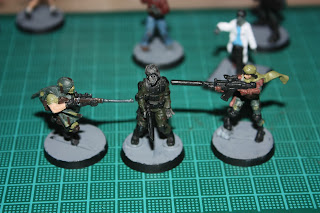 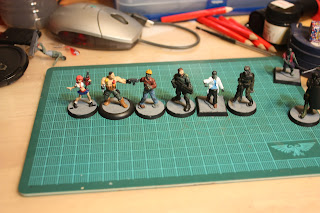 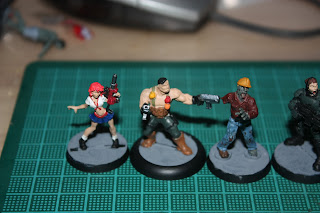 Close up of the figures. Same with the picture below. 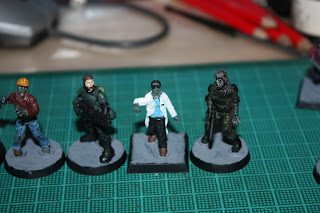 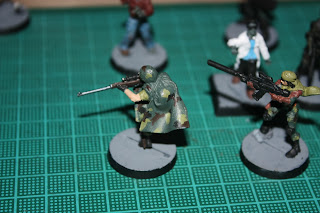 For my figures I typically go for what I call the Three Foot Paint Job, as long as the figures look good from a minimum of 2ft-3ft away (playing distance when they are out on the table) I am happy. I paint the figures for play not for show. This isn't to say I dont spend the time and paint more detailed figures, because I do, though those figures are typically given to others and not kept for myself. I should note that the HorrorClix figures are stock paint job out of the box with some touch ups (added Reaper Propaints Aged Red Brick as blood in what would be bullet holes, bites, or other wounds, the Aged Red Brick is the color I use for blood, I knwo others use the Tamiya Clear Red).

Sorry for the clutter in the background, the photos were taken at the table I have the computer I use for photo editing and also use as my work station for assembling and painting my minis, and working on terrain. Because I use the table for all this it tends to get cluttered up between projects.


I initially was planning on posting the info about the Evil Pharmaceutical Corporation my next post, but because I had my camera out and some of my figures right here by me decided to post the images instead.
Posted by Unknown at 11/10/2010 07:44:00 PM